“It was definitely a surprise when Kyle reached out to me and pitched the idea to return to competitive play and skip their team at the Olympic Pre-Trials this October,” said the Moose Jaw, Saskatchewan born Simmons. “With their team being in the same unique position as 4 years ago and the familiarity I have with Colton and Kyle, I thought it would be a great opportunity to give it another shot.”

“With Tanner Horgan leaving our team and not much time left to prepare for the Olympic Pre-Trials, we decided to look for a seasoned skip that would be used to the pressure in the upcoming months,” said Colton Lott. “When Kyle suggested asking our previous skip Pat to return, I was very excited at the possibility of curling with a player of his stature.”

With a season of unknowns ahead, Team Simmons will need to take it day by day. “Given the state of the pandemic, we recognize next season may still look different,” Second Kyle Doering said. “We are grateful for all the work and sacrifice frontline workers and everyone involved in fighting COVID-19 have given and wanted to take this moment to say thank you.”

About Team Pat Simmons
Team Pat Simmons is a curling rink based out of Winnipeg Beach, Manitoba. The team consists of Pat Simmons, Colton Lott, Kyle Doering, Tanner Lott, and Emerson Klimpke. Team Simmons is currently ranked 10th in Canada on the CTRS (Canadian Tour Ranking System) and will participate in MCT (Manitoba Curling Tour) WCT (World Curling Tour) and Curling Canada sanctioned events such as the Road to the Roar Canadian Olympic Pre-Trials next season. 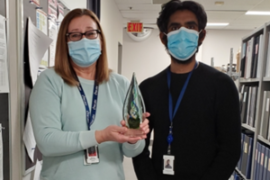